I wish I could describe my way to New Orleans as crazy as it actually was, but I don’t think that’s possible. I’ll try my best – still in a little bit of shock remaining from that day.

Because there wasn’t any train connection from Ossining train station to NYC so early in the morning, because there wasn’t any NYC Bus Airporter going to La Guardia so early in the morning – and because getting up at 2am is really not my cup of tea, I decided to get to the airport in the evening previous day. Let’s just say that the night was very interesting. But let’s start from the beginning.

In the late afternoon on Thursday, January 12, I got on my train to NYC. But even this simple quest wasn’t without any complications. The vending machine (or whatever it’s called) where I always buy my tickets suddenly decided not to accept my debit card. Why? It’s been always working. And that day, that certain time when I’m already running late for my train it just wasn’t working!

“Really? Really, today?” I was speaking loudly to the machine starting to lose my vision in the sudden wave of panic going through my body. Thanks to the lady who passed me with a little bit concerned look in her eyes and who told me to try the other machine (Why didn’t I get that idea? It was so obvious!) – it worked. Glad to be on that train I put my headphones on with the combination of all Muse songs from the oldest ones to their current most played ones and spend whole way by listening to the music and watching the Hudson river and all the cliffs on the other side (my favourite part of traveling with train on the Hudson line).

In NYC I literally ran from Grand Central to the NYC Airporter to catch the last connection of that day. The driver was maybe the nicest person I met that day. We talked all the way and I learned about his passion for cooking. With no dinner in my stomach this conversation was a tiny bit painful, but at the same time, I really enjoyed hearing about different ways how to make a perfect steak. And no, I am not being sarcastic now. When somebody is talking about something he or she really loves, it usually sounds interesting to me even if I usually don’t find the topic interesting at all.

I arrived at La Guardia and tried to find some place where I could lay down and try to catch at least two, three hours of sleep. I wasn’t so lucky with that. The only place where I found a bench was closed, locked. So I ended up upstairs at the dining course with a snoring man and some men fixing the ceiling. With a drill. At midnight. We’ll get to that, I promise.

So, as I said, I found a place to stay and tried to make myself as comfortable as possible on a hard chair and a narrow bar-like looking table. I put my suitcase under my feet and my fuzzy slippers which I always bring to airplanes on, found the most comfortable (= the weirdest looking) position, put headphones in my ears with some music on and covered my eyes with my sweatshirt which was my pillow as well (and I guess this made me look even weirder) and tried to fall asleep.

I actually did fall asleep. But about 30 minutes or an hour later, some terrible sound woke me up. Like if all the people at the dining course were transformed into werewolves. But it was only one man (or maybe a woman, it wasn’t really clear) – and according to the bag from CVS pharmacy which was laid at the table next to his (or her) “bed” made of chairs he has taken some super-strong sleeping pills. If he didn’t, he would wake himself up with the snoring. Even people on the lower deck had to hear that. Probably whole New York and a good half of New Jersey population had to wonder what is that sound and if they shouldn’t rather lock themselves in their houses and just stay there until the government ensures them that there’s no danger outside.

And another 30 minutes later – what a surprise! A pair of men started to fix the ceiling almost straight above me! But because I was really exhausted at around 1am I fell “asleep” – this kind of sleep when you don’t know if it can actually be called sleep because you are half-asleep and half-awake at the same time and it’s just making you more exhausted than you already were.

It was something about half past 3am when I decided that I can’t let this weird kind of sleep making me exhausted anymore so I got some coffee and a croissant for my early breakfast (without any dinner the previous evening, it didn’t seem too early for having a breakfast). And then went on the adventure of getting through the gates. Doesn’t matter how many time I have done it, it’s always a terrifying experience for me. But let’s be honest, it wasn’t so many times I’ve done this as my first flight experience ever took place on June 6, 2016.

I survived getting through the gates and ran to find a bathroom to make myself a human being again. With another breakfast and a juice bought in safe distance from the gates, I waited (trying to stretch my stiffed body so I looked like if I was possessed by some evil strength) for my flight.

Let’s make a long story short – because of the seating system of Southwest Airlines I ended up sitting between a very nice young Indian woman and… ehm… spatially distinct… ok, the man was just wider than what his height was. So I felt like a sardine. At least the woman left the window “curtain” (sorry, don’t know how it’s called even in Czech) opened during the take-off, otherwise it would be a disaster (I’m always sick when the plane is taking off unless I can see out of the window – and this is the reason why I always book a seat next to windows). But there was one good thing about that trip. My people, you won’t believe that. In the seats right next to the seats where I sat, there was sitting Captain Kirk’s stepfather himself. Greg Grunberg. Firstly I was confused and my not-so-well-movie-educated brain considered him as Captain Kirk (and so I made myself look like if I grew up in a cave when I said so in my YouTube vlog). And don’t think this man was just someone who looks like Greg Grunberg, even the plane crew announced it.

We landed in Houston. And to make it more interesting:  when I got on the plane in NYC, the crew took my carry-on suitcase (I packed everything in a carry-on to save time) because there wasn’t any more space for my carry-on. So it was turned into a checked-in baggage. But what I didn’t know was that I won’t get it back until we land in New Orleans. And my boarding pass for the next flight was in there. Totally panicked I tried to explain the plane crew what was the problem and luckily for me there was one very energetic woman who ran with me all around the place trying to get me a new boarding pass.

You could definitely see that we were in Texas. As soon as you got off the plane you could see a huge cowboy shoe and many cow skins. Honestly, it made me a little bit surprised – to see cow skins at the airport. But whatever – this was Texas. You shouldn’t be surprised by anything here – as I learned especially on my way back home. But about that later.

With our delayed flight I got to New Orleans and nervously waited if my suitcase will appear at the baggage claim. (By the way, Lilly Singh known as Superwoman was actually right when she talked about her concerns: why do they say that you “claim” your bags? It sounds like if you were claiming a soul of somebody walking around. It’s just a too strong word for just picking up your cases.) Just to make it clear so you don’t have to pretend that you are super-clever by thinking: “Why didn’t she just check it at the Houston airport?” I want to ensure you that I really tried to double-check if they put it on the next plane, but I was told by an elder man with a pink polish on his nails: “My dear, the suitcases are not screened so there is no way how we can know if it is on that plane.” He was actually very nice so I just smiled back nicely and started to wonder what I was gonna do if I didn’t find my suitcase in New Orleans.

But, thankfully, I found my suitcase and as a symbol of my small victory I proudly showed my bus ticket (which was in the suitcase as well) to the airport shuttle driver and could finally get to the hotel. The driver was very friendly. Everybody was called “love” and as soon as we got out from the airport he started to talk about the history of New Orleans, about swamps and how that whole area is amazing. Honestly, he wasn’t wrong. That place is in fact just wonderful. Even the little piece of land I saw from the aeroplane was just magnificent. Swamps all over, thousands of dead-looking (but still very good-looking) trees and highways and city built literally on the water. 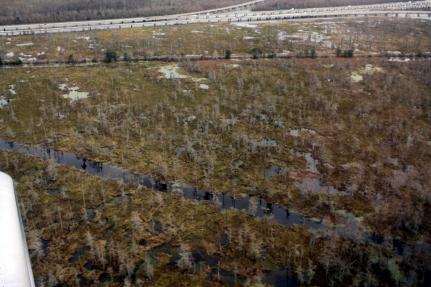 I was dropped off at the hotel, welcomed by another man with a strong accent, a Mardi-Gras beads were put around my neck at the same time he shook my hand (Was he secretly some kind on an octopus humanoid?) and as soon as I got through the door, two young and very nice girls took care of me, gave me a huge envelope with all different New Orleans what-to-see brochures, big New Orleans 2017 Official Guide, Wi-Fi password and an emergency contact (Yes, I am being careful – mom, grandma and all other people who say I’m careless, I hope you will read this one day!) and imaginary sand of 45 hours started to pour in an imaginary sandglass.

And what did I do as the first thing in New Orleans?
– to be continued –